Argus Monitor is an alternative to the well known tool SpeedFan.

A prerequisite for using the fan control features of Argus Monitor is a supported SuperIO monitoring, a modern AMD/Nvidia GPU or a supported AIO cooling solution.

The program can control most commercially available monitoring chips from Nuvoton, ITE, Winbond, Fintek and SMSC, which are installed on the most widely used motherboards from Asus, Asrock, Gigabyte and MSI. In addition, fans on Lenovo Thinkpad and Dell notebooks can be controlled.

The speed of the fans can either be set manually to a fixed value or controlled with a characteristic curve depending on all available temperature sources.

Argus Monitor - probably one of the best mainboard fan control tools out there. 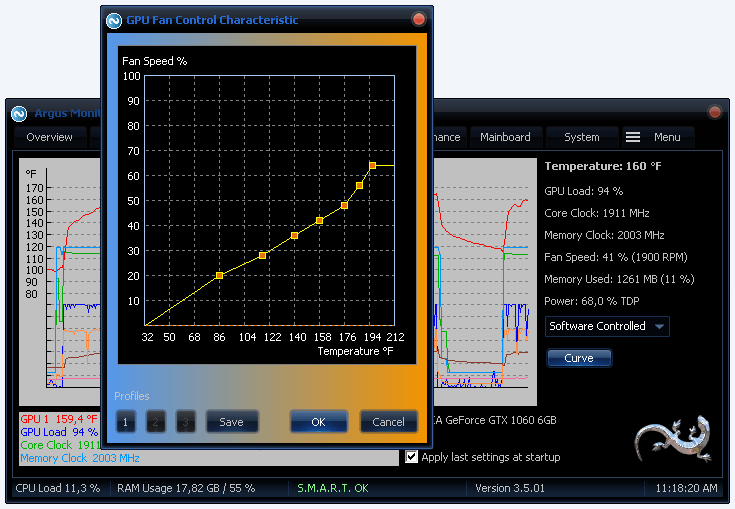 Since the first release of Argus Monitor in 2009 the program offers functionality to monitor the health status of HDDs and since there avaiability in the mass market also of those of SSDs.

Many if not all computer users experience data loss due to hard drive failure at one point in time. If you're lucky, you will notice error messages while accessing your files and will be able to save some of your data to another drive before the failing one stops working completely.

Unfortunately, as soon as you will be unable to access SOME of your files due to mechanical failure of your hard drive you have only very little time to react and save the most precious data you have not backed up to another physical medium before.

Fortunately, almost all modern hard drives support a technology called S.M.A.R.T. (Self-Monitoring, Analysis and Reporting Technology). Studies have shown, that up to 70 percent of all hard disk failures can be predicted in time so that the user has time to save all imporant data before the disc fails completely. The most extensive of these studies was done by Google by monitoring 100.000 hard disk drives of all major manufacturers over a period of nine months.

Because the Windows operating systems (up to and including Windows® 7) do not inform the user of the S.M.A.R.T. status of the systems disks, additional software is required if you want to profit from the failure predicting capabilities of your drives.

Argus Monitor runs as a background task and constantly monitors the health status of your hard disks. You will be informed in case one of the critical S.M.A.R.T. values changes. If one of the attributes reaches a vendor specified threshold, you will also get a warning that the hard drive is likely to fail within the next 24 hours of operation. Argus Monitor also stores the S.M.A.R.T. status of every drive (even the ones attached only from time to time - e.g. via S-ATA) and will therefore be able to warn you of decreased drive health even if the hard drive was attached to another PC when the value decreased.